AmCham Serbia’s General Assembly Meeting saw seven new members of the Board of Directors elected, while the 2019 annual report was presented and the annual Hero Award handed to the initiators of the "Pruži korak" campaign. 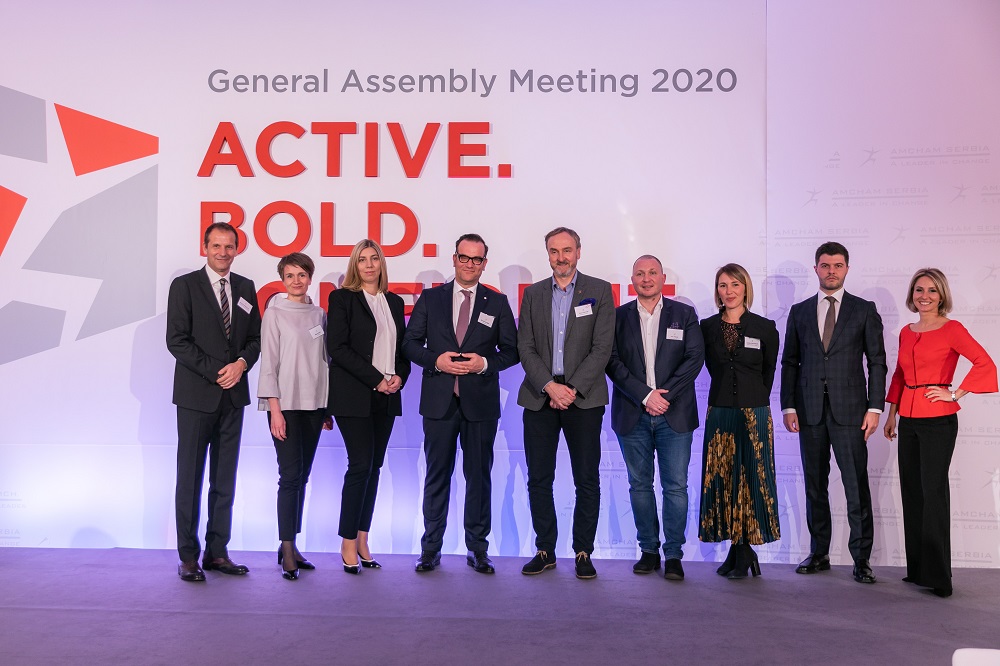 AmCham Board will be led by the newly elected President - Zoran Petrović of Raiffeisen Bank. In addition to the new AmCahm President, member companies voted Ivan Miletić of Philip Morris International as the First Vice President, Ronald Seeliger of Hemofarm as the Second Vice President, and four members for the position of Untitled Governor: Živorad Vasić of IHG, Milana Jević Gadović of Delhaize Serbia, Sandra Marinković of MSD, and Borislav Miljanović of Represent System.

“As a leading independent business association, AmCham will continue to strive to improve the business environment in Serbia, accelerate economic and regulatory reforms, and establish predictable and equal business rules for all. We will continue to provide unequivocal support to the Government of Serbia in implementing reforms, but we will also provide constructive criticism, which will always be accompanied by formulated proposals and good practice in areas where the economy recognizes the need for improvement. We will continue to be the eyes and ears of the economy and a partner to the Government, with our sleeves rolled up, ready for constant open dialogue,“ said Zoran Petrović, new AmCham President.

Petrović thanked the previous president, for her exceptional dedication and energy, thanks to which numerous initiatives and efforts by AmCham have been recognized as high quality contributions to improving the business climate in Serbia.

Commenting on recent results, Jelena emphasized the importance of praising and encouraging all the reforms and initiatives that have been implemented which make it easier, faster and cheaper to operate today both for our members and for the entire Serbian economy.

Pavlović added, "Although there are many challenges ahead, macroeconomic stability has been achieved in the previous period, steps have been taken to reduce the grey economy, and inspection control has undergone reformulation, while the process of obtaining building permits is simpler and more efficient than ever. In addition, Serbia has continued to digitize, introduce eGovernance, and reform the Tax Administration and the Labor Law. We have also conducted a very constructive dialogue on the topic of justice.”

This year's AmCham Leader in Change HERO Award was handed to Tamara Klarić and Bogdan Stevanović for the "Pruži korak" initiative. Thanks to the "Pruži korak" campaign, and a mobile app that has brought together 500,000 people and over 60 companies, over 50 million dinars have been raised to build the NURDOR Parent House, which will support children with cancer and their families.

For each of the steps covered by the app, users have set aside a corresponding amount of money which was donated by socially responsible companies. The App is still active, and anyone who installs it on their mobile phone can join.

"As an organization that brings companies together, this year's jury has unanimously decided to award an initiative that has united individuals and companies in the same purpose, showing that there are no large or small contributions, large or small steps, large or small effort, but that it is only joint action that produces results! We thank Tamara and Bogdan, and we look forward to their next projects.” said Pavlović, who presided over the Leader in Change HERO Award Jury.

Follow this link for the AmCham Serbia Annual report 2019